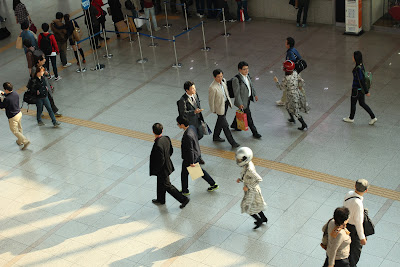 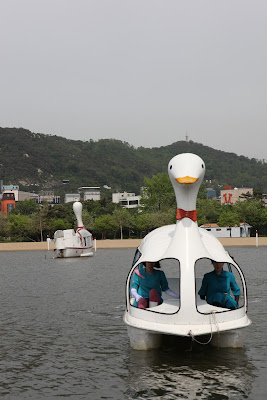 The Michelangelo Pistoletto Band? Although a New Zealand audience may initially find it a trifle odd that artists Bona Park and Eunji Cho, South Korean women born in the 1970s, pay homage to a septuagenarian Italian painter in titling a performance project that blends music, video and more, the shared sensibility with the elder practitioner of Gesamtkunstwerk soon becomes apparent. As the pair state on their website, they “respect his passion, works, and name!”

Certainly, the resultant abbreviated label that they have also bequeathed to their project, Mich Pistol, has a slyly ironic quality, evoking an endearing yet aggressive punk ethos. Korean popular music is currently capturing a global audience via savvy corporate marketing strategies and extensive social media-based fan networks. Amidst these swirling transnational flows propagated by what has been termed the Korean Wave, the DIY and decidedly non-commercial work of Park and Cho offers a gust of fresh air, fending off K-pop’s glitzy production and calculated, anodyne sounds.

In their collaboration as the Michelangelo Pistoletto Band, Park and Cho draw on a Korean tradition of edgy, subversive humour that runs back to the pre-modern period, when itinerant troupes would entertain villagers with masked drama and other forms of comedy that satirized the aristocrats in power. Under the Japanese Occupation (1910-1945), censorship and political repression made critique dangerous, but such writers as Chae Man-shik, whose “My Idiot Uncle” subtly mocks slavish acceptance of the colonizer’s assimilationist policies, suggests the rebellious spirit that suffuses Korean society in the face of pressures to conformity. Even more striking are instances of writers and artists who refused to kowtow to power under the harsh years of South Korea’s military dictatorship. Most notorious among these dissidents was poet Kim Chi-ha who was imprisoned, not least for his work “The Five Bandits”, in which he skewered (with his pen) five key groups of power holders, from business tycoons to cabinet ministers, in the authoritarian Park Chung Hee government.

South Korea now has a vibrant civil society as a result of the democratization movement that in June celebrated the 25th anniversary of the 1987’s mass demonstrations that forced the government to consent to fair elections; nevertheless, concerns have arisen that hard-fought freedoms are being eroded under the current Lee Myung Bak administration. In the eyes of many, the incumbent president is fully living up to the nickname of “The Bulldozer” that he was known by as the CEO of Hyundai’s engineering and construction wing before entering politics. Not only has a central platform of his presidency and his former role as mayor of Seoul been urban renewal, but he has exerted a heavy hand in attempting to control local media and stifle dissent. A “growth at all costs” mentality and a promise to revitalize peripheral areas of South Korea has fueled such initiatives as his controversial “Four Greater Rivers Project,” which some have seen as a waste of money and others have criticized as environmentally destructive.

The Michelangelo Piccoletto band strive to make familiar urban landscapes unfamiliar again. In doing so, they have focused, aptly, on Incheon and its outlying areas for art installations and the filming of their music videos. Now the third largest city in South Korea, Incheon offers keen observers, like Park and Cho, a series of striking contradictions for exploration.

Known in the West primarily as the site of Macarthur’s landing during the Korean War and the decade-old international airport that has since regularly achieved annual world-best ratings, Incheon has a fascinating past, a turbulent present, and a contested future. By virtue of its port location, the city has long been a gateway of commerce and was once home to a thriving Chinese trader community. Nonetheless it has yet to shed an ongoing status as an industrial and working class neighbour of the more glamorous capital of Seoul, a contrast wonderfully evoked in director Jeong Jae-eun’s 2001 debut, Take Care of My Cat, which played in the Wellington International Film Festival.

Forces of change are afoot, however: Incheon was designated South Korea’s first free economic zone and is currently being rebranded as a global city, with government interests proclaiming the ambitious hope that English will become as prevalent a lingua franca in the city as in Singapore and Hong Kong so that it may serve as a commercial hub for Northeast Asia. But such ambitions come with costs: in “Heart of Korea,” Mich Pistol critique the obsession with national branding and hollow English (and French) coinages that hold out a vision of utopian futures but appear likely to come to naught and, regardless, promise little benefit for the nation’s marginalized. Park and Cho pedal a swan boat backwards in a park pond that has since disappeared to make way for redevelopment, and a disembodied voice recites to the beat of a rudimentary and mechanical techno backing track:

Similarly, their clip “Owner of Another Island” showcases the duo dressed in ornate gowns and standing in front of a deserted resort complex on the West Sea island of Seongam-do. Peurobangseu (“Provence”) reads the sign behind them, and local viewers will recognize the backdrop as an example of the weekend getaway sites that have arisen in recent years, frequently with faux-European stylings, as Korean citizens take part in the global imagining of elegant leisure. That the West Sea, not far from Seongam-do, is the site of an ongoing territorial dispute with North Korea that played a role in instigating the shelling of Yeonpyeong-do in December 2010 adds another layer of meaning to the use of an everyday setting that has been rendered eerie.

“Forecasting,” in particular, exemplifies the cognitive estrangement that arises from their portrayal of the urban landscape. The clip is largely shot in the new and still incomplete development of the Songdo International Business District, which has been widely touted as the showpiece centre for South Korea and Incheon’s global aspirations. Despite sparking initial frenzied real estate speculation, the area has continued to maintain a forlorn air, amidst growing concerns that with the global downturn its promise as a gateway city may not come to fruition. The notion of “Forecasting” takes on additional resonances as Park and Cho, this time clad in futuristic garb, pop up at various points within Songdo and around Incheon, as one almost expects tumbleweeds to come blowing by in time to a monotonous voice reminiscent of subway announcements:

One day in April
Four Forty Nine in the afternoon
The Sunshine in Subway Number One
seems to be related to a city, Incheon
…
작성자: Mich Pistol 시간: 오후 11:35 댓글 없음:


With Karl Chitham and Aaron Lister, wonderful curators who invites us to New Zealand!
In spite of the tight schedule, we feel, it was such a great experience! Thanks to Karl and Aaron for making things happen!
작성자: Mich Pistol 시간: 오후 11:31 댓글 없음:


We had another performance at St. Paul gallery, Auckland, NZ on the 10th of Aug. and the last performance at the beautiful balcony of Dunedin Public Art Gallery, Dunedin, NZ on the 11th of Aug. The Ladder is Part of the Pit, a amazing contemporary music band supported us and played a beautiful music in Dunedin Public Art Gallery. We really appreciate it!

After a talk in Wintec College, we had a performance in Waikato Museum on 9th of Aug, supported by a super cool local band, bushwig led by Leafa wilson, a super curator in Waikato Museum.
작성자: Mich Pistol 시간: 오후 10:59 댓글 없음:

sorry for the late post. we did interview with Radio Active 88.6 FM to promote about our performance in City gallery in Wellington, NZ.