We were invited to Hamilton, New Zealand by SPARK, International Festival of Media, Arts & Design.

We performed at the Waikato Museum on Thursday 9th August and gave a Masterclass on the same day at Wintec college.  We also had work on display until the 10th August at the Calder & Lawson Gallery, University of Waikato in the group exhibition, Raised Voices.

Our performance went well with a big support of Hamilton band BUSHWIG, another great band in Hamilton, which performed together with us.
We really appreciate to people who came to see our performance and lecture!

the University of Waikato and City Gallery Wellington have teamed up to produce our tour a series of performances and events. Many thanks!

About a band preparing to get retired when it becomes top

About the band preparing to retire at their glory days

Michelangelo Pistoletto Band(hereinafter as Michey Band) was organized by two female artists,  Bona Park and Eunji Cho,  when they participated in a Residency Program at Gyeonggi Creation Center located in Seongam- island, Ansan, Korea. From its start, the band was not called as such. The band used to be called 123 Band, which was named after the only Bus No. 123 conneting a little remote island, Seongam-island, to a city, Ansan. After performing two songs ‘To Let’ and ‘Owner of Another Island’ in an empty box building in the island, it changed its name into Michelangelo Pistoletto Band. Michelangelo Pistoletto is an artist and a founder of a residency program in Italy, where both artists of the band participated in different years. However the band turns authority, dignity, seriousness or complexity of art associated with the powerful male’s name into abruptness, heterogeneity, lightness, flatness or easiness. Michey Band seems to take an opposite direction that performativity of the grand name has, and its strategy appears to be successful.

However, why should it be a band? For Bona Park and Eunji Cho, doing a band (or art) is a fantasy that they never reach but still dream, and a band performance (or artistic performativity) is a lip-synced music, which is never matched with real sound. It is as ‘Guns and Roses’ to Bona Park or ‘Prince’ to Eunji Cho. Their commanding stage presence and overwhelming performances enrapture and drive Michey Band but frustrate them at the same time. They present themselves in a form of non-fine art, band music, and reveal the process that such shameless and unsophisticated trials fail.
Without aim and desire, the fantasy is repeatedly led to fiasco, which is an ingrained characteristic of their works. However it surprisingly plays a role to unveil political and social structure implied in landscapes where they intervene. The band makes strange surroundings - empty buildings in a remote island, land for sale, flats lined up in a form of unrefined American-style bed towns, a global city where post-modern skyscrapers rise up, also, desolate ruins in an old collapsing town which has been simultaneously inhaled into a whirl of redevelopment project, and a rustic resort which became an abandoned community or a ruin - much more unfamiliar, The band just appears in music videos against such backdrop, but such landscapes get more pushed to a frontline and to a political arena.

They are a band but neither musicians nor singer- songwriters. They write lyrics but ask a composer to make music, and then they just try to imitate a band by synchronizing the songs recorded with others’ voices. Their performance copies ‘cool band like looking’, but it comes somewhat awkward bit by bit sliding far from integrity. Their performance, which seems nothing, veils something but unveils others. Lyrics are not clearly heard at the first time and yet get more prominent in a series of repetition, while their body movement, which do not specifically express, ridiculously steps backward behind the lyrics and landscapes. Michey Band chooses landscapes with careful intentions. It is needless to say how intentionally they choose places for performance or frame music videos. Obviously, Mickey Band’s humorous performance abandoned or breached customs of institutional arts. However, because the landscapes and place they choose are familiar issues in contemporary art, their performance seems to go back to representation of landscapes, which is an institutional art. It represents their chaotic conditions or intended twists leading to spectators’ laughter and confusion. The band will retire just when the public look at them with a surfeit of yearnings as well as confusion concurrently. Since then, the band will remain as a myth. Michey Band is waiting for their retirement. It means that they are waiting for the peak when their dramatic disappearing becomes possible. It is for fading into an eternal fantasy and staying as cacophony of an aimlessly expended place and history.
작성자: Mich Pistol 시간: 오후 10:42 댓글 없음:

our performance tour in New Zealand! 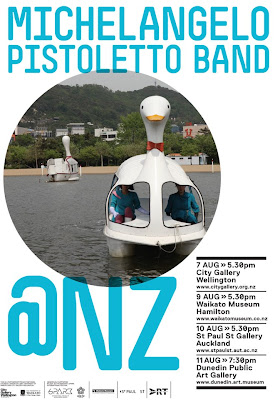 sorry for late posting! we had very busy schedule in New Zealand! it was great though!
작성자: Mich Pistol 시간: 오후 10:33 댓글 없음: